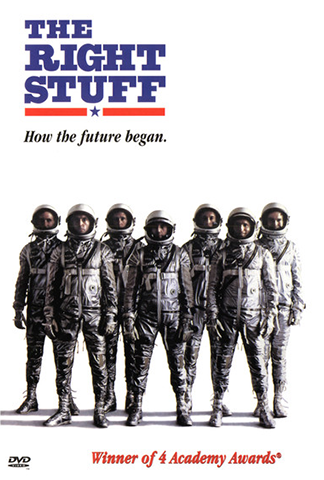 Irwin Winkler and Robert Chartoff, coming off an Oscar® win for Best Picture in ROCKY (1976) and a nomination for RAGING BULL (1980), would receive yet another nomination in their final project together, this 1983 historical drama adapted from Tom Wolfe’s eponymous book. The film documents a group of military test pilots who go from breaking the sound barrier to being selected for the U.S.’ first manned spaceflight, Project Mercury. The cast includes Sam Shepard in an Oscar®-nominated role as Chuck Yeager (and his real-life counterpart actually makes a cameo appearance in the film!), Scott Glenn as Alan Shepard (no relation to Sam), Ed Harris as John Glenn, Dennis Quaid as Gordon Cooper, and Fred Ward as Gus Grissom.

Winkler and Chartoff outbid Universal for the rights to adapt Wolfe’s book; as the author did not want to write the ensuing screenplay, director Philip Kaufman shelved the original script by William Goldman and wrote his own. Original backing studio United Artists (who also backed ROCKY) dropped out after the failure of HEAVEN’S GATE (1980), and a company led by Alan Ladd, Jr. and backed by Warner Bros. stepped in to take their place. Most of the film was shot in and around San Francisco, with location shooting also taking place at the real Edwards Air Force Base, and a vast array of full-sized aircraft, special effects, and dozens of scale models were used throughout the film.

THE RIGHT STUFF sacrifices a great deal of historical accuracy throughout its story, but in the process it brings us a superbly-crafted adventure that literally takes us through time and space. While it is highly dramatic, it also manages to sprinkle in a good deal of colorful dialogue and humor throughout, which keeps things from getting too overwrought or stale. It is also impressively edited, earning a well-deserved Academy Award® for its team of five. Another equally deserved Oscar® went to yet another ROCKY veteran, Bill Conti, for his musical score which soars just as much as the aircraft on-screen. The sound editing and mixing earned the film’s other statuettes, and it was also nominated for Best Picture (losing out to TERMS OF ENDEARMENT). In short, it is a historical drama on a truly grand scale, yet it’s one that can be appreciated by virtually anyone who watches it.

THE RIGHT STUFF at IMDb