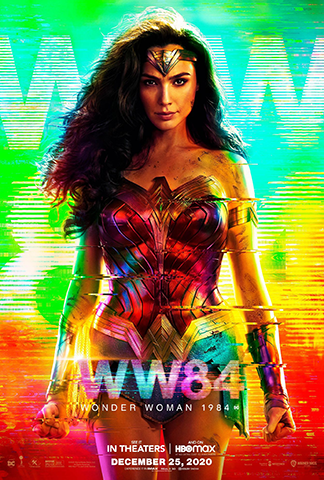 In this sequel to the 2017 film which inducted Wonder Woman into the DC Extended Universe, our titular pioneering superheroine (reprised by Gal Gadot) fends off in the equally titular year against two long-established supervillains, Maxwell Lord (Pedro Pascal) and her eventual archenemy, Cheetah (Kristen Wiig), over a mysterious artifact called the Dreamstone which, as you might have guessed, fulfills the wishes of whoever touches it.

I enjoyed the first film a lot and felt that the DCEU had finally received the shot in the arm that it so desperately needed, but it actually turned out to be nothing more than a flash in the pan, as the films which followed it, much like the ones which preceded it, have ranged from mediocre to just plain terrible. And apparently in keeping with the standard—or lack thereof—which most of DC’s recent theatrical ventures seem to have set, WW84 seems very much underwhelming and disjointed when compared to its predecessor.

The main plot seems very much contrived, there is very little meaningful development of anyone and what development there is seems incomplete or “skipping ahead” at times, and the pacing is too slow for much of the first half which, except for a mall heist scene which evokes bad memories of the completely unfitting opening to SUPERMAN III (although, to the film’s credit, that same scene actually contains some of the best period set design in the entire production), is devoid of action or substantial storytelling, relying instead on overblown attempts at cheap-shot humor. The film also reeks of tired liberal tropes and criticisms about the 1980s, including greed, excess, and the ever-ongoing search for oil, but doesn’t really do anything remotely new or interesting with them; it’s very likely these were dug out to, for at least the 746,985th time in the last five years, make contemporary political comparisons that would go over the head of an average filmgoer who just wants a little escapism. While the second half finally manages to pick up things to some degree, it crashes and burns with an ending that absolutely screams cop-out.

The casting isn’t too terrible, however. Gadot continues to fit the role of Diana/Wonder Woman very well despite the movie’s other flaws, Chris Pine holds his own as a somehow-resurrected Steve Trevor, and the two still have enough good chemistry to spark with each other. However, most of the other characters don’t have memorable enough performances to write about, if memorable for the right reasons. Even Pascal’s interpretation of Maxwell Lord seems too much like a contemporary parallel in and of itself when it isn’t far too over-the-top for my tastes—and this is coming from someone who’s enjoyed some campy movies before, especially rather campy superhero movies like SUPERMAN (1978). I’m not exactly sure what tone this film was trying to set, but I wasn’t really feeling it for the most part as I went through the proceedings. The visual effects were also subpar, specifically Wiig’s fur-laden performance as Cheetah which looks absolutely dreadful once she assumes her supervillainous moniker (although it might have fit more as what the characters in the live-action CATS film should have looked like!), and Hans Zimmer’s score is nowhere near as iconic or melodious as that of Rupert Gregson-Williams in the first film.

It’s a real shame that this one turned out the way it did, because I was holding out hope that it would at least be half as good as its predecessor. Keep in mind, the only reason I was even able to watch this film so early was through my residency-subsidized access to HBO and, by extension, HBO Max (which also means I get to watch Zack Snyder’s version of JUSTICE LEAGUE next year with the hope that it will at least be just a little better than the absolute garbage theatrical version we got). I’m not sure either way that I would have signed up for yet another streaming service just to watch this movie, but I am sure either way that, while not the most horrible superhero sequel I’ve ever seen, it is not anywhere close to the worthy follow-up it could have been.