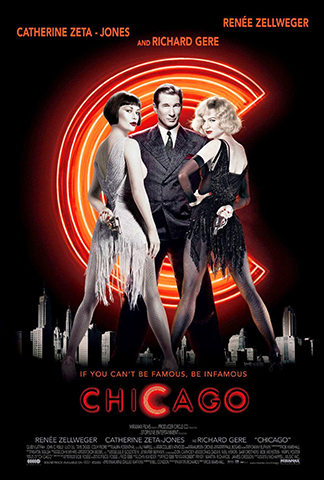 Continuing on my long-gestating series of Musical Films Which May or May Not Influence The One I’m Trying to Write In Any Way, Shape, or Form, we have the most recent musical recipient of the Academy Award® for Best Picture.

In 1920s Chicago, vaudevillian Velma Kelly (Catherine Zeta-Jones) and housewife Roxie Hart (Renée Zellweger) find themselves in prison together after having both committed murder. The two murderesses fight it out for the attention of not only the press, but also that of sleazy lawyer Billy Flynn (Richard Gere), in order to gain enough fame to avoid the gallows.

CHICAGO, with music by John Kander, lyrics by Fred Ebb, and book by Ebb and director/choreographer Bob Fosse, originated on Broadway in 1975 from the eponymous 1926 play by Maurine Dallas Watkins, a reporter and playwright who, while working as a courthouse journalist for the Chicago Tribune, covered the trials of two women accused of murdering their lovers. Its original run at what is now called the Richard Rodgers Theatre was largely unsuccessful and played for less than 1,000 performances. Fosse had been planning a film version of CHICAGO after having won an Oscar® for his direction of the 1972 film version of CABARET (which also contains songs by Kander & Ebb), but died before realizing this goal. In 1996, a modified revival of the show with a more minimalist set design debuted as part of the New York City Center’s Encores! series, and was far better received in the post-O.J. Simpson era of criminals as tabloid celebrities. It later transferred to the Rodgers (and has since moved to the Ambassador Theatre), becoming the second longest-running show in Broadway history. This renewed interest also renewed talk of a film version, which was ultimately led by then-Disney subsidiary Miramax Films.

As someone who has obviously never seen the stage version of this production, I can’t speak to the true fidelity of the film adaptation to either of its stage versions, although this film has influences from both productions within it, and some have remarked that the original book was razor-thin. However, it definitely excels as a musical for the silver screen through its screenplay adaptation by Bill Condon. The pre-existing story and songs are woven together in a fantastic visual feast that is equal parts depth and spectacle under the direction and choreography of Rob Marshall, as well as stunning production and costume design which perfectly encapsulates the Prohibition era of the Windy City, and fantastic pacing through the editing of Martin Walsh. In fact, all of the musical numbers are presented non-diegetically as vaudeville performances, successfully differentiating between the gritty reality of our characters and the surrealist fantasy which they would all rather reside in.

Zeta-Jones and Zellweger shine individually and collectively even as their characters steal the show from each other—that is, when their supporting cast doesn’t steal the show for themselves at times; in fact, both Queen Latifah as the jail’s matron “Mama” and John C. Reilly as Roxie’s naïve husband Amos have particularly memorable numbers of their own. Still, Zeta-Jones in particular seems to have much of this picture to herself, especially in her musical performances, and it shows in her Oscar® win for Best Supporting Actress (though Latifah was also nominated for the same award). Zellweger provides a suitable contrast in performance, given that her character is not as experienced and yet very determined to get her place in the spotlight.

CHICAGO became one of the best musical films in decades and heralded a renewed interest in the genre. It still holds up even now, and is worth a watch for anyone who enjoys musical theatre, musical films, and—you guessed it—all that jazz.