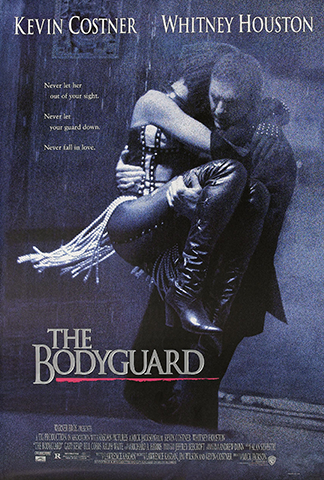 Whitney Houston, who had entered the pinnacle of her musical career by the early 1990s, made her film debut in this 1992 drama where she portrays a role not totally unlike her real-life one as music superstar and aspiring actress Rachel Marron. Rachel has been receiving death threats from an unknown stalker, and her manager hires former Secret Service agent Frank Farmer (Kevin Costner) to protect her. The relationship, of course, turns from a professional one to a more personal one…

Screenwriter Lawrence Kasdan was an advertising copywriter when he originally wrote THE BODYGUARD in 1975 as a vehicle for Steve McQueen and Diana Ross. The film had originally entered production a few years later at Warner Bros., with McQueen’s role represented by Ross’ boyfriend at the time, Ryan O’Neal. However, Ross eventually pulled out of the film. Kasdan ultimately teamed up with Costner to co-produce the film after the two worked together on SILVERADO (1985); they were eventually joined by Costner’s producing partner Jim Wilson at the duo’s company, Tig Productions (off the heels of their 1990 Best Picture Oscar®-winning Costner vehicle DANCES WITH WOLVES). Interestingly, Costner based his portrayal of Frank on McQueen, bringing the original inspiration full circle; he also strongly campaigned for Houston to land the role of Rachel.

Costner and Houston manage to spark at least some chemistry with each other throughout the film, even if said chemistry is notably restrained. Such restraint is probably understandable from at least one point of view, however, given what their relationship is expected to be, and what it ultimately becomes. The more action- and thrill-packed sequences, as well as yet another one of Alan Silvestri’s woefully-underrated scores which accompanies them, certainly sold this story for me much more than the intended primary arc between Rachel and Frank.

Of course, this film is far better known for its soundtrack and, above all else, Houston’s cover of Dolly Parton’s 1973 song “I Will Always Love You” which, of course, has taken on a life well beyond its source material. Costner suggested the song as a replacement for “What Becomes of the Brokenhearted” when that ended up being used in FRIED GREEN TOMATOES (1991), and more notably also suggested Houston’s version start a cappella. Produced by David Foster (who also makes a cameo in the film as the Academy Awards® ceremony’s orchestra conductor) and released by Houston’s label, Arista Records, it became the best-selling soundtrack album of all time and won numerous GRAMMY® and American Music Awards among other accolades, while the aforementioned cover became the best-selling single by a female artist ever.

Unlike her fictional counterpart, however, Houston was not nominated for an Oscar®; this film’s only real-life nominations on that front were for Best Original Song (which it lost to “A Whole New World” from ALADDIN). It did, notably, also received seven Razzie nominations including Worst Picture, Actor (Costner), and Actress (Houston)—though I personally don’t think they were that bad.

THE BODYGUARD is not exactly the most romantic affair put on film, but it works for what it is and provides enough thrills to make up for its shortfalls elsewhere.

THE BODYGUARD at IMDb