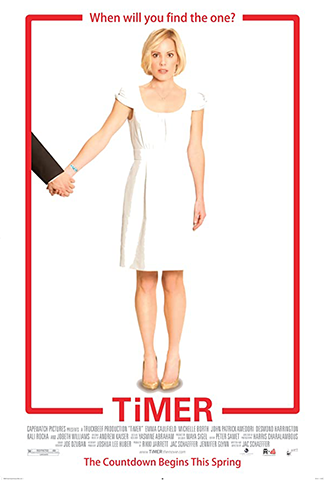 I know I’ve been very devoid of reviews as of late, but not for lack of trying. However, there are several films that I’ve been really meaning to watch and then write about. This, recommended to me by a good friend on Discord, is one of them.

This 2009 independent fantasy-comedy follows Oona (Emma Caulfield, best known as Anya Jenkins from the WB/UPN series Buffy the Vampire Slayer), a woman on the edge of 30 who is one of many who has a digital device aptly called a TiMER implanted into the underside of her wrist that acts as a countdown to the day where its wearer is purported to meet their soulmate. However, her TiMER is not ticking at all—and she’s taking matters into her own hands.

TiMER has an interesting approach to the age-old question of what it would be like if we knew when we would come across the one we were meant to be with, and this unique concept is backed up with sharp, witty dialogue from writer-director Jac Schaeffer. Indeed, the entire film manages almost completely not to rely on typical rom-com clichés as one would especially expect an entry from the late 2000s would, and on the contrary seems among the genre’s freshest films even today, putting many much-needed twists on both its themes and on the entire idea of romantic comedies in general. And maybe it’s personal taste, but I appreciate the fact that this film is set not in some future-that-probably-never-will-be, but rather an alternate version of contemporary society, which gives the underlying premise of the whole story some relative verisimilitude in the process.

It’s a shame that this film isn’t widely available to watch, which lends even more to what I believe is its vastly underrated status. But if you don’t mind getting discs through the mail, definitely check this one out.