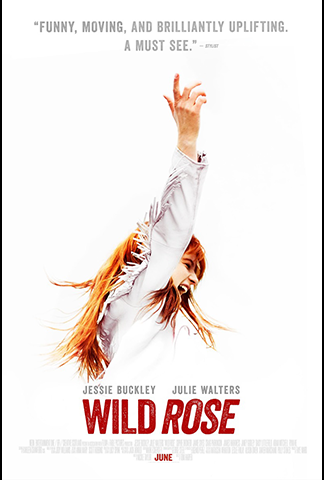 Country music is a very Americana form of music that is rarely if ever associated with the United Kingdom—but this drama film from across the pond follows Rose-Lynn Harlan (Jessie Buckley), a Glaswegian ex-con and young single mother of two, as she aspires to break out onto the country music scene.

The film contains a standard star-is-born premise which is already made far more unique by the combination of its country of origin and musical genre. Buckley holds her own in the lead (and received a BAFTA nomination for it), and has a nice singing voice to reinforce her role. The film also benefits from brilliant location shooting in both Scotland and Nashville, and cameo appearances from real-life country stars Kacey Musgraves and Ashley McBryde, as well as legendary BBC Radio disc jockey Bob Harris. However, WILD ROSE is not without its thorns. The first third of the movie is rather slow, a few other portions were rather clunky, and some of the supporting cast doesn’t pull their weight.

Overall, though, the film has enough emotion and its idea enough intrigue to overcome its flaws and provide a particularly fascinating watch.