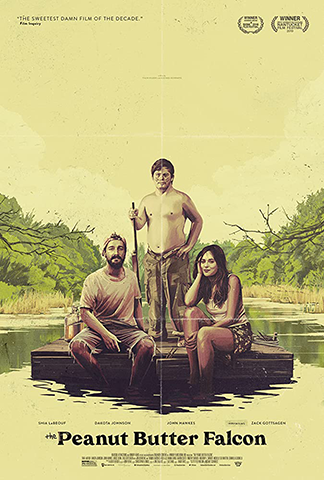 In this independent comedy-drama that became one of the great sleeper hits of last year, 22-year-old Zak (Zack Gottsagen), who has Down syndrome, escapes from a nursing home in Virginia in order to fulfill his dream of becoming a professional wrestler in North Carolina. Along the way, he meets and befriends Tyler (Shia LeBeouf), a fisherman on the run, and the two form an unlikely but close bond. Meanwhile, Zak’s caretaker at the nursing home, Eleanor (Dakota Johnson), attempts to search for him.

This marks the feature directorial debuts of Tyler Nilson and Michael Schwartz (both of whom also co-wrote the film), who first met and were impressed by Gottsagen at a camp for disabled actors in 2011. Although the duo were not certain that a film with a disabled actor in the lead would ever be financed, Gottsagen convinced them to write a screenplay tailored to him. A proof of concept video was shot for $20,000 and ultimately resulted in the feature film being funded. In addition to our main trio, the supporting cast includes Bruce Dern as Zak’s elderly roommate Carl, Thomas Haden Church as Clint, a retired wrestler and Zak’s idol; and two real-life wrestling legends: Jake “The Snake” Roberts as Clint’s friend Sam, and Mick Foley as a wrestling referee (both are also WWE Hall of Famers, although Roberts is ironically now signed to rival promotion All Elite Wrestling as a manager-type character).

THE PEANUT BUTTER FALCON is brilliantly written in both story and dialogue, with Zak as an effective modern-day Huckleberry Finn. The on-screen chemistry Gottsagen shares with LeBeouf is genuine and sincere, and both of their characters, being in very similar situations, are treated as equals. The movie sheds light on some of the unique circumstances those with Down syndrome have to face without being ironic or insulting, nor does it resort to telefilm-type melodrama to evoke artificial empathy. This, above all, is its greatest strength, as it is of course not necessary to repeatedly bash a viewing audience with Zak’s condition in order to get its point across.

This is a truly heartwarming and fantastic film, and one I most definitely recommend.

THE PEANUT BUTTER FALCON at IMDb