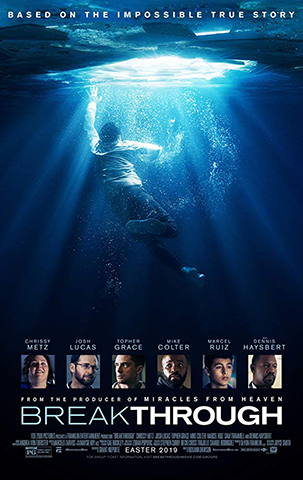 This film (which, as an aside, is the first 20th Century Fox film to be released by Walt Disney Studios Motion Pictures following Disney’s acquisition of the studio last month) is based on the book The Impossible, which is a recounting of actual events written by Joyce Smith. It depicts how Joyce’s adopted son John (Marcel Ruiz) suffers a tragic accident in which he falls through an icy lake and is on the edge of death, while Smith (Chrissy Metz) and his family and friends deal with the aftermath—and use the power of faith to aid in the healing process.

Co-executive produced by Stephen Curry—yes, the same one who is part of the NBA’s current dynasty, the Golden State Warriors (and yes, he does get a namecheck early on in the film), BREAKTHROUGH’s story is very solid and contains a highly empowering message. Fellow Christians, in particular, will appreciate how the Smiths and those around them use God to guide them through their ordeal.

However, the film is not by any means perfect. The casting is a mixed bag: I generally wasn’t a fan of Metz’s performance, and Topher Grace’s character of the new young Pastor Jason Noble came off to me as stereotypically goofy at times; in contrast, Dennis “Allstate” Haysbert as Dr. Garrett was particularly phenomenal, and Ruiz—for the brief periods of time when he was allowed to act—was quite genuine himself. Additionally, some glaring continuity issues plagued the film throughout, as well as some poor editing choices. The fact that BREAKTHROUGH’s message manages to shine through these flaws, however, is testament to how powerful it really is.