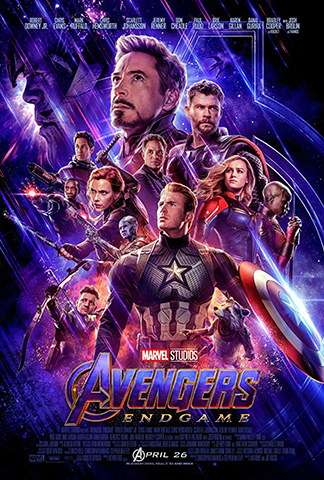 Almost eleven years to the date when the Marvel Cinematic Universe was first initiated with IRON MAN, and a grand total of 22 films released in that timespan, the Infinity Saga, as Marvel Studios present Kevin Feige recently termed it, comes to a conclusion for which the term “massive” would be a severe understatement.

As with its predecessor AVENGERS: INFINITY WAR, it would be extremely difficult to write a fathomable review of this film without an impressive amount of spoilers. In fact, it would be even more difficult to write a standard review for ENDGAME because there are spoilers on top of the spoilers leading into INFINITY WAR, and some fans may argue that even the two films between this one and that, ANT-MAN AND THE WASP and CAPTAIN MARVEL, while mostly standalone prequel films and therefore not necessarily of absolute importance in the overall saga, may at the very least provide hints to what is yet to come (and I can tell you that’s the case for at least the former apart from the obligatory mid-credits scene).

I will say this about ENDGAME, though: It is quite possibly the most satisfying conclusion to one of the most influential eras of cinema ever conceived. It wraps up an adventure its characters have been on for over a decade and provides an effective love letter to its fans in the process, incorporating all of the action, drama, humor, and heart that has made these films and its overall story the huge critical and commercial draws that they have been. I undoubtedly enjoyed it in ways both obvious and not so obvious (side note: #OscarOrBust for Alan Silvestri!), and I really wouldn’t have it end any other way than how it did.

If you’ve followed this saga from the beginning, you will find that ENDGAME is everything you’ve expected it to be, and far more.