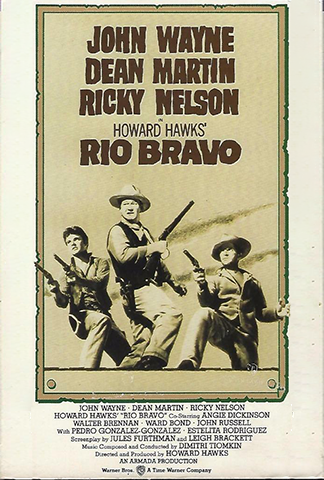 John Wayne portrays John T. Chance, the sheriff of the Texas town which forms the title of this 1959 Howard Hawks film. After Chance locks up Joe Burdette (Claude Akins) for a cold-blooded murder, Joe’s wealthy rancher brother Nathan (John Russell) and his gang of hired guns try to bust him out. Chance must ultimately rely on help from an unorthodox group of allies, including the alcoholic deputy Dude (Dean Martin, a man ironically later known for the lowball glasses of apple juice in his eponymous variety show), the crippled jail-watcher Stumpy (Walter Brennan, a three-time Best Supporting Actor Oscar® winner then starring on ABC’s The Real McCoys), and the young gunslinger Colorado (Ricky Nelson, a then-teen idol whom Wayne credited for much of the film’s box office success).

Hawks made the film as a response to HIGH NOON (1952), which he criticized for its protagonist sheriff’s perceived lack of heroism. Wayne also hated the film, and if you know him, you know it would be quite strange for any character he portrays to be anything but a near-unbreakable heroic type as it is. That being said, Chance is the very definition of a John Wayne character, perhaps among the most quintessential roles he’s ever portrayed.

RIO BRAVO is relatively slow when compared to your average Western film—indeed, the film runs nearly 2½ hours long—but its colorful cast of characters, solid dialogue, and obligatory songs by Martin and Nelson help make up for the pacing and provide a thoroughly watchable Western.