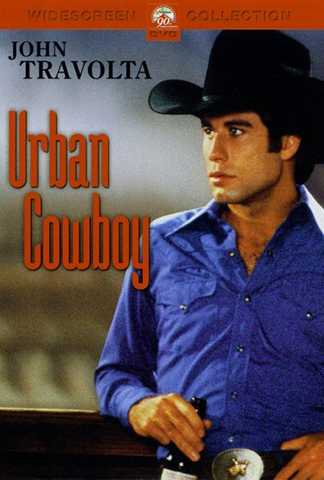 Three years after his breakout role in SATURDAY NIGHT FEVER, John Travolta takes his talents from the discothèque to the honky tonk as he stars in another Paramount film about someone who gets his kicks in a particular establishment specializing in a particular genre of then-popular music.

Travolta portrays Buford Uan “Bud” Davis, who works at a Houston oil refinery by day and hangs out at Gilley’s Club by night. He meets and soon marries Sissy (Debra Winger), but their union soon falls on the rocks and is ultimately threatened by the presence of ex-con and mechanical bull operator Wes Hightower (Scott Glenn) who starts flirting with her. Meanwhile, Gilley’s announces a $5,000 bull-riding contest—and Bud, of course, is eager to get in on the rodeo.

Director and co-writer James Bridges succeeds in capturing the atmosphere of Houston at the turn of the 1980s, especially that of Gilley’s, as well as the glaring issues present in the impromptu marriage of Bud and Sissy. Travolta shines as the egocentric Bud not only in his general acting performance but also particularly in the bull-riding sequences. And, yes, just like FEVER and GREASE before this, he also pulls off the dancing very well (side note: this marks the film choreography debut of Patsy Swayze, mother to and dance trainer of Patrick Swayze). It is ultimately a role that only an actor of his caliber can pull off.

While it’s almost entirely Travolta’s show, the supporting cast, particularly Winger and Glenn, cannot be overlooked—nor can the stellar hit-filled soundtrack, which even includes performances at Gilley’s by Charlie Daniels (“The Devil Went Down to Georgia”), Johnny Lee (“Lookin’ for Love,” which becomes the film’s de facto theme song), and Bonnie Raitt (“Don’t It Make You Want to Dance”), among others. Plus, much like FEVER did with disco, the soundtrack here sparked a short-lived pop-country movement which was often eponymous with its originating film’s title. URBAN COWBOY is overall equal parts entertaining and dramatic, and an invigorating snapshot of its time.

As a final bit of trivia: Gilley’s was a real-life, football field-sized honky tonk in the Houston suburb of Pasadena whose founder, country singer Mickey Gilley, also appears in the film. It closed in 1989 due to a falling out between Gilley and co-owner Sherwood Cryer; the building was gutted by arson a year later. A new Gilley’s opened in south Dallas in 2003, and features the original mechanical bull used in this movie.