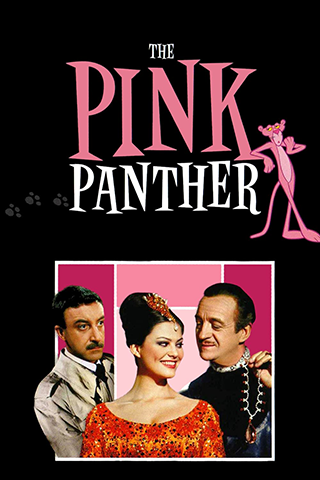 This is it: the 1963 original which came to become a mystery-comedy gem—literally speaking, of course, as the ever-bumbling French inspector Jacques Clouseau (Peter Sellers) investigates the theft of the priceless titular diamond with one slight imperfection, which is said to resemble a leaping panther.

I was excited to watch this movie again after so many ages. By itself, the story plays out like a typical early-1960s mystery tale, but the twist lies almost singlehandedly in Sellers, who is hilarious as Clouseau and is such a huge reason that this movie works. Whereas the archetypal foundations of the hunt for the missing diamond serve as the film’s head, Clouseau serves as the heart as he magnificently bungles his way through the case and is brilliantly backed by an ensemble supporting cast including David Niven as Sir Charles Lytton, Robert Wagner as his nephew George, and Capucine as Jacque’s wife Simone Clouseau. Capping it all off is a wonderfully iconic score by Henry Mancini, featuring tenor saxophonist Plas Johnson performing the sneaky melody.

And, not to forget, this movie also spawned a literal Pink Panther character which itself has arguably become better-remembered than the title sequences he originated in. One of the first projects by former Warner Bros. animators David H. DePatie and Fritz Freleng when they formed the DFE animation studio, the usually-mute feline later starred in a series of short cartoons for this film’s distributor, United Artists, which later aired on NBC and ABC; newer cartoons produced after the MGM/UA merger have aired on various networks as late as 2011. He has also become an advertising icon, having represented Owens Corning (manufacturer of a distinctively pink-colored housing insulation material) for the last 40 years.