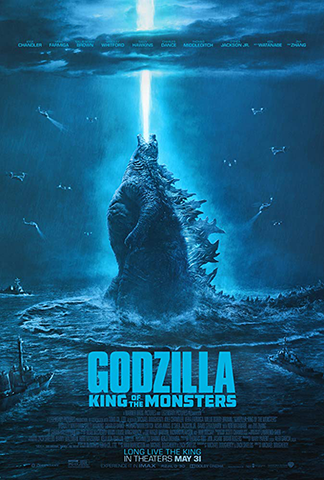 Back in 2014, I saw the Warner Bros./Legendary reboot of GODZILLA on its opening weekend. How I managed to call it a “notable effort” for which “Godzilla fans…should be pleased” despite criticizing the lack of actual monster action until the film’s climax and the unemotionally appealing story involving the human leads is beyond me. For what it is, it was not that bad, but it wasn’t that great either.

Fast forward five years later and the two aforementioned studios (who, like everyone else in Hollywood, are riding on Disney’s coattails and have joined the Shared Universe Bandwagon) have thrust Godzilla, along with King Kong, into what is being termed the MonsterVerse. While the battle between these two literal movie giants is currently set for next March, this sequel to the 2014 GODZILLA film primarily reintroduces the titular monster’s familiar supporting characters to this rebooted world, namely Mothra, Rodan, and his main nemesis Ghidorah (all of which are collectively labeled “Titans”) as the cryptozoological agency Monarch attempt to track them down after a group of ecoterrorists kidnap one of Monarch’s own, Emma Russell (Vera Farmiga) and her daughter Madison (Millie Bobby Brown) in order to gain control of a device called the Orca, a device Emma invented with her now-ex-husband Mark (Kyle Chandler) which emits frequencies only Titans can hear.

KING OF THE MONSTERS corrects one of the biggest flaws of its predecessor in that there is far more attention on the monsters and their epic, highly destructive clashes than on the human characters, and the action that we get is far more intricate and intriguing. Director and co-writer Michael Dougherty admitted that it was a struggle to balance the monster action with the human story, and there have been apparent complaints from critics that the humans in this movie are “underdeveloped,” but I thought they were, for the most part, depicted rather well—especially Brown as Madison and Ken Watanabe as Dr. Ishirō Serizawa, who thankfully ends up getting more to do here than he did in the last film. However, I particularly disliked Farmiga’s character of Emma, who ends up arguably doing more harm than good in the name of the “greater good” (and, minor spoiler, she spouts some environmentalist nonsense of her own in the process).

The visual effects throughout are particularly stunning, and Godzilla in particular is very expressive—something we didn’t get to see much of in his last film. Also, in addition to Toho’s classic monsters, we also see a series of new, original Titans introduced in this movie, and I assume we will be seeing and hearing about more of them as the MonsterVerse expands. Finally, Bear McCreary contributes a suitable score comprising not only traditional orchestration but also taiko drumming and chanting for certain cues, a natural fit for this world-renowned Japanese icon.

While not perfect in all respects, GODZILLA: KING OF THE MONSTERS more than obliterates its predecessor in a highly enjoyable display of Hollywood-style kaiju monster action.

GODZILLA: KING OF THE MONSTERS at IMDb