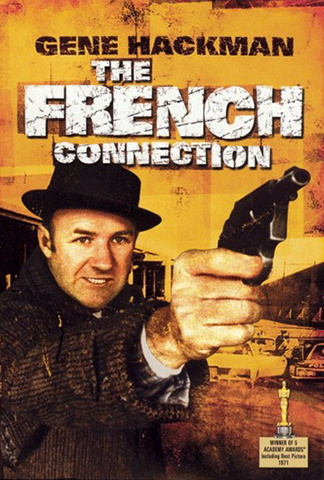 Based on true events as recounted in the eponymous book by Robin Moore, THE FRENCH CONNECTION follows Jimmy “Popeye” Doyle (Gene Hackman) and Buddy “Cloudy” Russo (Roy Scheider), a pair of New York City narcotics detectives who attempt to track down a huge shipment of heroin being smuggled into the country and capture the ringleader, a wealthy Frenchman by the name of Alain Charnier (Fernando Rey).

This film is brilliantly crafted in every aspect of its production. Working from a solidly realistic and gritty screenplay by Ernest Tidyman, Hackman delivers one of the greatest performances of his career and shares an incredible amount of chemistry with Scheider as his partner in crimefighting. Also worthy of mention are Owen Roizman’s cinematography (filmed entirely on location around New York City, as well as in France and Washington, D.C.) and Gerald B. Greenberg’s editing, which add an unprecedented level of excitement throughout the story, especially in a climactic and iconic chase sequence where Popeye speeds through the streets of Brooklyn in pursuit of an elevated train.

THE FRENCH CONNECTION won a total of 5 Academy Awards®, including Best Picture (the first R-rated film since the MPAA rating system’s 1968 introduction to win the honor), Best Director (William Friedkin), Best Actor (Hackman), Best Adapted Screenplay (Tidyman), and Best Film Editing (Greenberg), all of which are of course very well deserved. It even spawned a 1975 sequel reprising Hackman and Rey. It is reflective, edgy, and provocative; the very definition of an action thriller, and a high recommendation from me.

THE FRENCH CONNECTION at IMDb