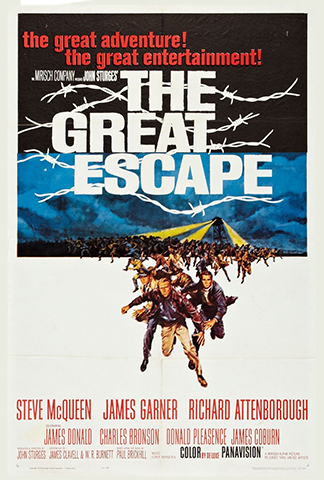 Steve McQueen was just about at the height of his career when he starred in this 1963 epic film with an all-star ensemble cast which loosely documents the true story of how British Commonwealth prisoners of war executed a mass escape attempt from a Nazi maximum-security camp during the later stages of World War II.

“Loosely,” of course, is itself an understatement, as numerous changes to the original story (as documented in the eponymous nonfiction book by Paul Brickhill, an actual POW at the prisoner camp during the war) were made in order to appeal to audiences and create a vehicle for its many stars, which besides McQueen also include James Garner, Richard Attenborough, James Donald, Charles Bronson, Donald Pleasance, James Coburn, and David McCallum. The characters are fictitious, but are based on—and are often composites of—real people. The role of Americans in the escape is largely inflated, while that of several other groups is virtually omitted; and McQueen’s famous motorcycle stunt (which he, a cycle enthusiast, did almost entirely himself except for the final jump due to insurance obligations) was among many other aspects that were completely invented.

Despite being largely fictionalized for entertainment value, this film is full to the brim with nearly three hours of riveting action and tense conflict. There is no real character development throughout, though one can excuse this lack given the circumstances of the story. McQueen, however, stands out as the undisputed, career-cementing star even amongst peers that were equally if not better known. Also of particular note is Elmer Bernstein’s score and particularly the rousing main title cue, which perfectly represents the epitome of pure action that is THE GREAT ESCAPE.

THE GREAT ESCAPE at IMDb