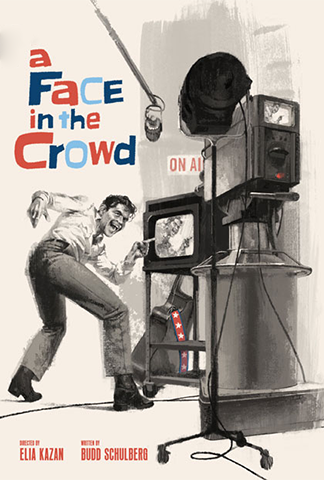 Although I had watched this film several years ago as part of a college film class, the recent addition of this 1957 Elia Kazan drama to The Criterion Collection (whose box art I have elected to use for this review) compelled me to give it another screening, as there were many aspects of it that have fascinated me and have even influenced some of my own projects and dialogue in ways both obvious and not.

Larry Rhodes (Andy Griffith) is a raucous, guitar-picking drifter with an infectious laugh who is plucked out of a northeast Arkansas jail by local radio host Marcia Jeffries (Patricia Neal), who dubs him with the stage name Lonesome Rhodes. The show eventually gains popularity and makes Rhodes a household name on not only radio, but television as well. As his fame rises, however, so does his power, influence, and manipulation…

Griffith makes a stellar feature film debut as Lonesome Rhodes, perfectly capturing not only his folksy, down-home public facade but also the tyrannical, megalomaniacal control freak that he ultimately ends up becoming; it’s a far cry from the roles he would be better known for on television like Sheriff Andy Taylor or Ben Matlock. And while it’s mostly Griffith’s show, Neal brilliantly portrays a deuteragonist torn between a devotion to Rhodes and her own ambitions. Also among the supporting cast are Walter Matthau as staff writer of Rhodes’ TV program, Anthony Franciosa as Joey DePalma, a mattress company worker turned Rhodes’ agent; and 22-year-old Lee Remick as Betty Lou Fleckum, a young baton twirler and eventual object of Rhodes’ affection. (Like Griffith, Franciosa and Remick also make their film debuts here.)

Kazan works off a screenplay by Budd Schulberg (marking their second and last collaboration after the Oscar®-winning ON THE WATERFRONT), who adapted his short story “Your Arkansas Traveler” for this production. The film is not entirely a straightforward drama, as there are elements of black comedy sprinkled throughout, but it certainly is more theatrical than the average drama, even to the point where characters’ dialogue occasionally overlaps—and given its story and characterizations, these exaggerations actually works in the picture’s favor, as it unfolds a biting satire of television and fame which bodes just as true now as it did over sixty years ago.