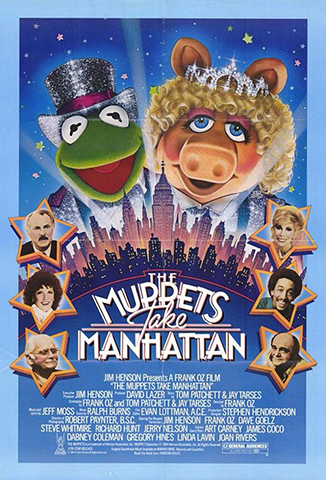 When you’re developing a project that happens to take place in New York and that happens to be a musical, you happen to stumble across existing movies which happen to share those characteristics to some degree or another and, therefore, you just happen to watch them. This is the latest such example, in which the Muppets—having just graduated from college, mind you—immediately set out to take their successful revue to the Broadway stage, only to find that the job is of course much more difficult than expected.

I had watched the Muppets’ previous theatrical adventures, THE MUPPET MOVIE (1979) and THE GREAT MUPPET CAPER (1981), many years ago. This 1984 installment takes a rather different tone in several ways. The Muppets’ trademark comedy is well-combined with wonderful musical sequences that are not nearly as parodic as previous films (with memorable songs by Jeff Moss, a veteran composer for Sesame Street), and yet the story can actually get really sentimental at times, adding some unexpected but satisfying emotion to the proceedings. And, of course, human cameos including Joan Rivers, Art Carney, Gregory Hines, John Landis, Liza Minnelli, Brooke Shields, and even then-Mayor Ed Koch liven up the story even further.

The underlying plot is essentially a mostly-played-straight tried-but-true trope, one where the meta humor and in-jokes of its two predecessors are almost totally nonexistent. While I admit that I missed those moments looking back, THE MUPPETS TAKE MANHATTAN is overall quite enjoyable and a solid follow-up in the Muppet film canon.

THE MUPPETS TAKE MANHATTAN at IMDb