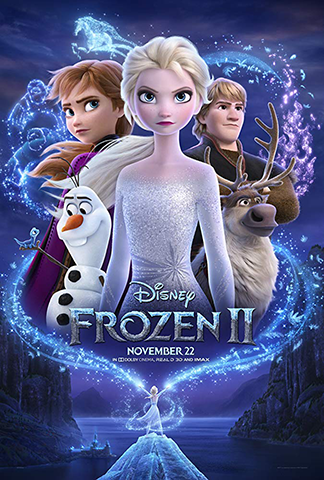 I was one of those people who just liked FROZEN (2013). I could see what appeal it might have to a target audience of which I was not a part of, and I thought it was an absolute shoo-in for its two Oscar® wins (Best Animated Feature and Best Original Song, “Let It Go”). I didn’t hate it…I just liked it. But, naturally, millions more people loved it. So, naturally, it made a lot of money. And, in these days where studio executives seem to look almost exclusively at box office returns to determine whether or not to do anything, a sequel was even more inevitable for FROZEN than it probably already would’ve been if not for its critical acclaim and award-season hardware. With that being said, let’s take a look at how the second chapter turned out…

Three years after the events of the first film, Queen Elsa (Idina Menzel) hears a mysterious voice and, in her quest to follow it, unintentionally awakes the elemental spirits, putting the kingdom of Arenedelle in jeopardy. She, along with the other returning characters—her sister Anna, Anna’s iceman boyfriend Kristoff, Kristoff’s reindeer companion Sven, and the ever-popular snowman Olaf—journey together into the Enchanted Forest from whence the voice originated in order to “find the truth” about the kingdom so that they, in turn, can set everything right.

FROZEN II benefits from a series of new animation technologies which particularly have an added effect on several of the spirits, and even on such relatively mundane elements as characters’ hair and embroidered clothing. The result is even more visually stunning to watch than its predecessor. Similarly, the aural elements of the sequel take a leap, with both superior sound design and score by the also-returning Christophe Beck. Kristen Anderson-Lopez and Robert Lopez’s songs, while not as memorable as in the first film, are still decent as well, and include future Best Original Song nominee “Into the Unknown” and my personal favorite of the soundtrack, “Lost in the Woods,” a Kristoff vehicle seemingly inspired by the 1980s David Foster-produced power ballads of the band Chicago.

Unfortunately, the far more important story department is where this film’s greatest weakness lies. My issue was not so much with the darker tone when compared to its predecessor as it was with its highly derivative nature—besides being effectively a somewhat straightforward “Heroine’s Journey,” if you will, certain other aspects of the story managed to evoke (even in jest, and regardless of intent) other well-known media franchises which seemed to take away from the film’s own experience. While the Arandellian sisters and Olaf seem to grab all the best moments, Kristoff is, aside from his Chicago-homage musical number, mostly left out in the cold (no pun intended, as it is autumn in the story) as he repeatedly and unsuccessfully attempts to find the right words to propose to Anna. Even Sven seems to get more attention than his human counterpart does!

FROZEN II is buoyed enough by its stunning animation and music to make up for its obvious narrative flaws, although younger audiences are likely more apt to enjoy it than those taking them to see it.