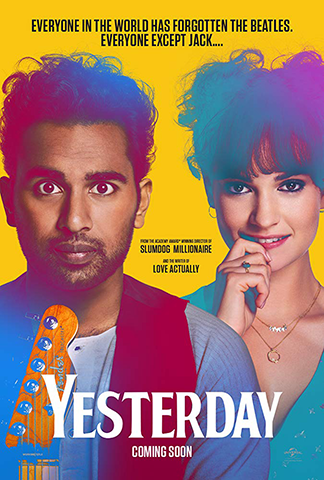 The Beatles have always had a fascinating history in film, whether appearing on-screen in the hilariously fun A HARD DAY’S NIGHT (1964) or the animated YELLOW SUBMARINE (1968), or having their already influential songs included in soundtracks such as the ill-fated SGT. PEPPER’S LONELY HEARTS CLUB BAND (1978) and the jukebox musical ACROSS THE UNIVERSE (2007). This film fits in the latter category.

Himesh Patel is Jack Malik, a struggling musician who, during a freak global blackout lasting exactly 12 seconds, manages to become the only person on Earth who remembers the Beatles. He soon gains fame for songs that aren’t really is, even becoming the opening act for Ed Sheeran’s world tour.

The songs are rendered in very fascinating new covers by Patel himself, and his versions aren’t half bad. Unfortunately, I didn’t really find myself as pulled in to the underlying story. The premise of the world forgetting the existence of such a musical and cultural phenomenon is, of course, intriguing, you get a very “that’s it?” kind of feeling at the end, that it doesn’t go far enough with its problem or the problem’s solution—especially when other things such as cigarettes and Coca-Cola (the latter of which has a particularly notable mention in a Beatles song) have also disappeared from the global conscience.

Oddly enough, for a movie whose premise is based on a world who has forgotten the Beatles, having an intricate knowledge of the Fab Four’s musical lexicon seems to help. Granted, I didn’t recognize all of the songs (although not all of the songs featured are Beatles compositions, given Sheeran’s role) and even several better-known tunes which I even somewhat expected to show up didn’t make much of a presence. I should probably be listening to more of their back catalog.

In any event, YESTERDAY manages to be relatively enjoyable despite its narrative disappointments.