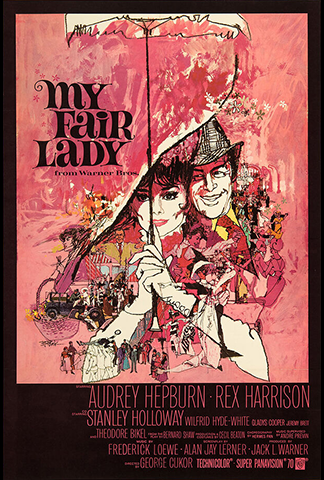 This is one of those films which I managed to start long ago, then stopped for whatever reason at some point during my screening and was unable to finish. And while I own two VHS copies of it (one single-cassette and one double-cassette), this is a film which deserves to be watched in widescreen high definition—so I did just that.

George Bernard Shaw’s play PYGMALION, about a speech therapist who aims to turn a Cockney flower girl into a proper, high-society lady, has seen many, many adaptions, but none have been as popular or prominent as MY FAIR LADY, originally produced for the Broadway stage by Herman Levin, writer/lyricist Alan Jay Lerner, and composer Frederick Loewe. Funded by CBS in exchange for the rights to the cast album (which was released by then-subsidiary and ironic co-founder of the network, Columbia Records), it was the most successful and longest-running Broadway show at the end of its six-year run, and won six Tony® Awards including Best Musical and Best Actor in a Musical for Rex Harrison. Warner Bros. purchased the film rights to the production in 1962 for a then-unheard of $5 million (equivalent to $42.4 million in 2019 when adjusted for inflation), with the agreement that CBS would receive 50% of the gross profits and full ownership of the film seven years after the film’s release; the broadcaster has possessed the copyright ever since.

Julie Andrews was also part of the original Broadway cast and was nominated for a Tony® as well. While Harrison would reprise his role from the stage in the film version, Warner Bros. president Jack L. Warner wanted someone with “a great deal of name recognition” for the female lead and had Audrey Hepburn cast instead (although, of course, Andrews would make her screen debut in the same year—and win the Academy Award® for Best Actress in the process—for Walt Disney’s MARY POPPINS), despite the fact that Hepburn was not a singing star. In fact, her singing was considered unacceptable and most of it was ultimately dubbed over by veteran “ghost singer” Marni Nixon, who amazingly sounds more like Julie Andrews than Hepburn!

Nevertheless, Hepburn holds her own particularly well throughout the course of the film, especially after she masters “The Rain in Spain.” Rex Harrison duplicates his stage role quite perfectly, and both—under the seasoned direction of George Cukor—are surrounded by wonderfully colorful production design, a solid screenplay by Lerner, and innately memorable songs by Lerner & Loewe, all of which enhance the leads’ delightful performances with an air of elegance that perfectly fits the underlying story and culminates into one of the most supreme musical masterpieces of the screen. A definite recommendation from me.

MY FAIR LADY at IMDb