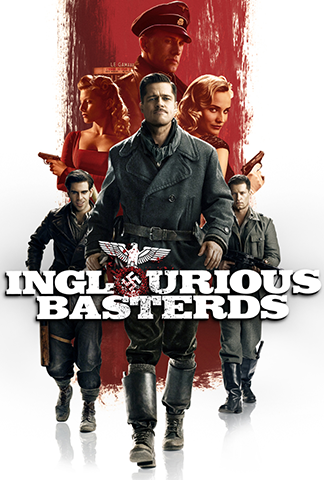 When I watched DJANGO UNCHAINED several years ago, I remarked that “perhaps this kind of revisionist historical fiction isn’t exactly my cup of tea.” But, this little piece of Quentin Tarantino revisionist history which came right before it somehow managed to get a different reaction from me.

Set during World War II, the film follows two parallel plots to assassinate National Socialist German Workers’ Party leaders in occupied France: one by a group of Jewish-American soldiers called the Basterds (sic) under the leadership of Lt. Aldo Raine (Brad Pitt), who scalp their victims after killing them; and one by a Jewish-French cinema owner named Shoshanna Dreyfus (Mélanie Laurent), whose venue is selected for the gala premiere of a Nazi propaganda film. Between these two forces lies SS Col. Hans Landa (Christoph Waltz), who not only has been tracking down the whereabouts of Raine’s group but also has ties to Shoshanna’s past…

This film took over a decade for Tarantino to write, but it was a decade well spent as it seamlessly blends genres—and languages!—into a rollercoaster black comedy-laden action war epic that epitomizes Tarantino’s signature brand of heavily violence and snappy dialogue. The leads are particularly well cast, and Pitt especially seems to have fun with his character as much as his character seems to have fun scalping Nazis. Waltz is brilliantly evil as the fiendish Col. Landa, winning 16 combined accolades (including the Academy Award® for Best Supporting Actor) for his performance.

In retrospect, perhaps the reason why I enjoyed this act of alternative history more than DJANGO was because its story and characters pulled me in far more (not to mention the cinema aspect probably touches me more as a fellow film buff and filmmaker), and I just managed to enjoy it far more for that reason alone.