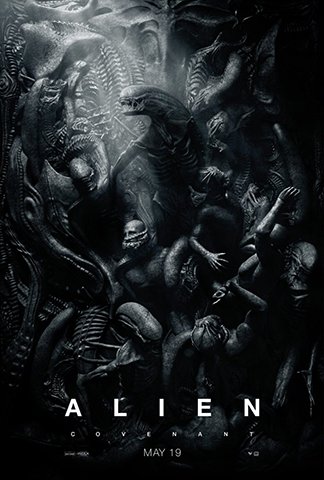 I haven’t seen too many films in the ALIEN franchise. I’ve seen the first two, of course (the only ones that matter) and, for whatever reason, PROMETHEUS (which I wasn’t really all that into). And the only reason why I sat through this particular one is because it came up in a discussion about how bleak the future of Hollywood currently is…and, ultimately, this one entered the conversation. On that note, I’d like to welcome you to the latest installment of Films I Dared Watching To See How Stupid They Actually Are…

Set eleven years after the disastrous Prometheus expedition in the aforementioned eponymous 2012 film, a deep-space colonization vessel named Covenant is distracted by a rogue transmission from a nearby habitable planet and decides to go check it out, not wanting to spend another 7 years cruising to their original destination. This is the first of many incredibly dumb decisions made by a crew which does not give any reason for us to care about them nor do they show even the slightest character development throughout.

I won’t spoil too much—partly because the details are not only way too graphic even for an ALIEN movie, but also often reek of further dumbassery—but this whole thing was an absolute mess in its story (or lack thereof), direction (by the same Ridley Scott who also helmed the original 1979 film…what happened?!), visual effects (comprising cheap and overdone CGI which makes the practical effects of the first two films look even more realistic), musical score (anything that isn’t Jerry Goldsmith’s theme from the first movie is forgettable), and just about everything else.

My friend and collaborator, who is a far bigger ALIEN fan than I am, has admitted several times that this film absolutely infuriates him. However, ALIEN: COVENANT managed to infuriate me in the end as well (even though I shared many an ironic laugh throughout this whole ordeal). What’s probably more infuriating, however, is that 20th Century Fox and its new parent company, Disney, haven’t learned a single thing.