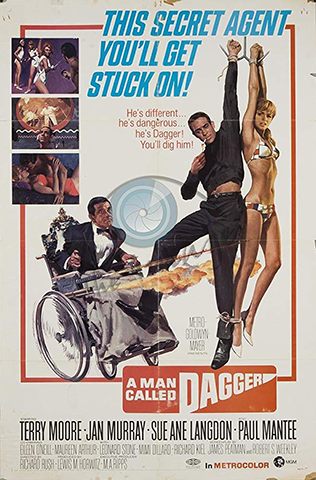 And now for probably one of the most unique character name origin stories in history. Gather round and settle down, folks…but first, a movie review.

Occasionally, Turner Classic Movies plays short subjects and other items as filler between their programming. One such film has been a 27-minute promotional reel produced by Metro-Goldwyn-Mayer in 1967 called, simply, Lionpower. It advertised “five fabulous full seasons” of entertainment, but this was ironically a period of winter for the once-proud kings of Hollywood that would soon shed much of its past both in terms of its physical studios and its film library, as many of the productions advertised were flops—and even what little of those films were presented here told as much. Nevertheless, the entire thing is worth a watch (warning: turn up your volume), as toward the end it includes an early promotional teaser for one of the studio’s few bright spots during this era, Stanley Kubrick’s 2001: A SPACE ODYSSEY.

For reasons I couldn’t imagine at the time, another film—or at least the title of it—caught my interest, if only because it was a title at least somewhat reminiscent of its genre: A MAN CALLED DAGGER (which shows up in the Lionpower video above at around 11:16). This spy film, clearly one of many who tried to follow in the footsteps of a certain 007, was completed in 1967 but was not released until January 1968 after MGM picked up the distribution rights, and is so obscure that it has never received a home video release in any medium (ironically, its soundtrack album is readily available), which probably means that neither Warner Bros., nor Turner Entertainment before it, ever inherited any rights to the film upon their acquisition of the pre-May 1986 MGM/UA library. Some time ago, however, I surprisingly managed to find this movie by way of a digitized albeit very beat-up 16mm film print on YouTube, and quickly downloaded it before it was ultimately removed.

The titular character is, as you might have guessed, the secret agent Richard “Dick” Dagger (Paul Mantee)—and when he’s not making love to any of several girls, Dagger is on the trail of a former Nazi colonel named Rudolph Koffman (Jan Murray), who secretly calls a meatpacking factory home and who has created a mind-controlling device implanted in a tooth in order to…wait for it…revive the Third Reich. Yes, it’s as silly as it sounds.

Dagger, who is clad entirely in black for much of the movie, is relatively mild-mannered when compared to that other, better-known secret agent—but he’s not entirely a poor man’s Bond and Mantee manages to hold his own just enough in the role to make it work. Koffman, on the other hand, doesn’t exactly scream someone who came out of the SS—he doesn’t even attempt to fake a German accent (even as some of his minions do!)—and as he’s rolling around in his fancy motorized wheelchair for most of the movie, he does far more talking than anything else which, naturally, makes most any scene he’s in unspeakably boring. Also, his catchphrase seems to be a high-pitched “Wrong,” which alone is rather laughable.

Of course, Koffman ultimately reveals in the final fight in the meat freezer that he is perfectly ambulatory, and yet it takes only one punch for him for him to be thrown back into the chair and inadvertently push a button which activates heretofore-unknown flame jets that send him flying through the air onto a waiting meat hook! Also, Dagger doesn’t actually fight him until roughly five minutes before the movie ends—and furthermore, he faces off against Koffman’s main henchman, the tall and not-very-bright Otto, no less than twice.

On another note, Dagger’s harem doesn’t contain anyone particularly memorable, save for the first girl he involves himself with, Harper Davis (Terry Moore), who for some reason has star stickers plastered all over her bare midriff.

The special effects are, of course, cheaper than cheap—to the point where a “laser” effect coming out of Dagger’s watch late in the movie looks like nothing more than a simple, non-moving red line in the center of the screen (although the faded colors of the print I watched didn’t help). Probably the one relative saving grace is the aforementioned musical score written by none other than the co-creator and first host of NBC’s The Tonight Show, Steve Allen (with arrangements by Ronald Stein)—which, although it’s standard ’60s spy film stuff and even contains the same four-note progression from the beginning of Monty Norman’s looking-down-the-barrel-of-a-gun theme music, perfectly captures the jazzy spirit of the wannabe spy film. The title song, on the other hand, contains forgettable lyrics by Buddy Kaye and mismatched vocals by Maureen Arthur.

A MAN CALLED DAGGER is low-budget and incoherent secret agent cheese that, to its brief credit, is somehow at least smart enough to not take itself too seriously. It’s not worth trying to find a copy of, though—if you even can.

Now to the originally-promised character name origin story. Long before I actually settled down to watch this thing, I settled on the name Dagger in designing a deuteragonist and love interest for the title character of KALE‘A™, although I ended up making it a first name. And, instead of being a James Bond ripoff, this Dagger—last name Branson—is a womanizing surfer and musician straight out of west Texas. I suppose I chose that name for this guy, dubbed the “Prince of Island Cowboys” by his magenta-furred mate, because it says a lot about his personality and his way of life: he looks sharp (yes, even when he doesn’t wear a shirt most of the time), thinks sharp, and is sharp…everything you’d come to expect from a man called Dagger.

A MAN CALLED DAGGER at IMDb