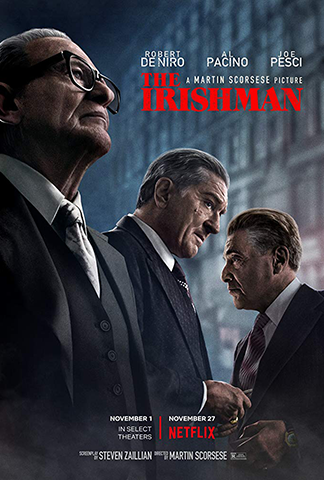 Martin Scorsese recently made waves with his controversial comments about the films of the Marvel Cinematic Universe not being what he considers “cinema.” I, as someone who has both MCU films and Scorsese films coexisting on the same shelf, disagree with his sentiments—and I can tell you that I was probably just as intrigued at the original announcement trailer for this film as I was for that of AVENGERS: ENDGAME. That being said, let us see how his latest picture holds up.

World War II veteran Frank Sheeran (Robert De Niro) recalls his time as a hitman for the Bufalino crime family, headed by Russell Bufalino (Joe Pesci), in a series of flashbacks dating back to the 1950s. He also focuses on a period in which he worked for the president of the International Brotherhood of Teamsters, Jimmy Hoffa (Al Pacino), who had financial ties with the Bufalinos and who mysteriously disappeared in 1975.

This film was based on the 2004 nonfiction book “I Heard You Paint Houses” (which serves as something of an unofficial subtitle for the film), with De Niro first spearheading production and bringing Scorsese onboard. Although development of the film began in 2007, it eventually stalled due to numerous rewrites, during which Scorsese directed three other films. A Mexican production company who had a domestic distribution deal with Paramount ultimately backed out due to the film’s climbing budget, and although the fledgling STX Entertainment was also attached for a time, Netflix ultimately stepped in and financed the entirety of the film.

Those of you who’ve watched Scorsese’s previous gangster films (and in particular, 1990’s GOODFELLAS, which also starred De Niro and Pesci) can expect very much his signature brand of black comedy-laden crime drama here, as entertaining and profound as ever. The three leads are, of course, absolutely spectacular and memorable; Pesci in particular fits into his role rather well, and it’s good to see him back on the screen in any event. The trio additionally gets a lot of support from a cast including Ray Romano, Anna Paquin, and Harvey Keitel. The production design throughout the film is very much spot-on, and no detail is overlooked when it comes to recreating each scene of yesteryear. While THE IRISHMAN’s 3½-hour running time may be a little off-putting at first (and it certainly must have been to Netflix’s five MPA member counterparts), the story De Niro’s character tells very much warrants the extra length—and I didn’t feel the film dragging for the most part.

Much of the relatively unique nature of this film comes in the de-aging effects as Frank looks back on his past. This process was done digitally by Industrial Light & Magic with the help of a custom three-camera rig comprising one RED Helium camera and two auxiliary Alexa Mini cameras (the only portions of the production not shot on actual film stock), with infrared makeup and flesh-colored tracking markers applied to the actors. This, in turn, helped ease the complex visual effects process—and while it’s not perfect by any stretch, it’s clear that the technology breaks a lot of ground on this film alone.

Yes, perhaps a film like THE IRISHMAN could have come out twenty or twenty-five years ago, maybe even at a length like this (after all, Ted Turner’s 1993 war epic GETTYSBURG clocked in at over four hours long!). But there’s something truly special about this film, and especially this particular set of stars working together, that it was very much worth the wait—especially that spent in development hell. This is a definite recommendation from me. (On a side note, is that Netflix building their Borg cube again after Universal rightfully destroyed it last year…?)

P.S. I know this is a Netflix streaming movie, but somebody push it to Blu-ray at some point! They DO still have their legacy disc-by-mail service, after all… (UPDATE: Thank you, Criterion!)

THE IRISHMAN at IMDb
Watch the movie on Netflix