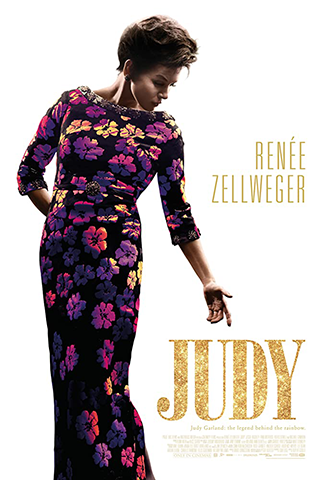 Peter Quilters’ Tony®- and Olivier-nominated play End of the Rainbow is the source material for this British-American co-production which primarily follows a period in the final months of actress, singer, and dancer Judy Garland (Renée Zellweger) when she arrives in London to perform a series of sold-out shows at the Hippodrome, which was then known as the Talk of the Town nightclub and is now a casino.

The film switches back and forth between 1968 and Judy’s teenage years, which depict several confrontations she has with her boss, MGM studio chief and partial namesake Louis B. Mayer, as well as the amphetamine regimen the studio forced onto her in order to control her appetite and keep up with the assembly-line production schedule, which would begin a lifelong addiction to drugs and alcohol from which she would never recover.

Much like Garland herself stole the show in many of her pictures and especially the 1954 version of A STAR IS BORN which she helmed, Zellweger steals this particular show—as well as the Academy Award® for Best Actress. In fact, she stole the show so much, especially in all of her singing performances, that I completely forgot it was even Zellweger in the role! Unfortunately, she’s the only real thing about this film that’s really memorable or remarkable. A biographical drama of this kind would certainly work far better as a miniseries (and one actually exists, which aired in 2001 on ABC and won five Emmys®), as the life of Judy Garland is so complex and nuanced that one mere 118-minute movie is unlikely to encapsulate it all. That said, however, it’s worth renting for the lead performance alone.