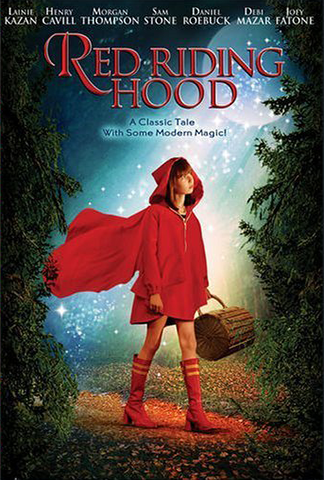 I’m not sure for the life of me where I first heard of this adaptation of the Grimm Brothers’ classic fairy tale. All I remember is that I managed to stumble upon it and added it to my DVD Netflix queue over a decade ago. Make of that what you will.

This version was produced in 2004 but was quietly released two years later by 20th Century Fox through their short-lived Key DVD label. In this loose, contemporary retelling, Red (Morgan Thompson, who is heavily made-up for a preteen and doesn’t have much else on her IMDb profile) and her family—including the added character of a stereotypically annoying little brother—live in a lighthouse on the edge of a nondescript ocean before inevitably going on her journey to visit her grandma (Lainie Kazan, better known for roles in both MY BIG FAT GREEK WEDDING movies and NBC’s 1980s drama ST. ELSEWHERE). Debi Mazar (GOODFELLAS and HBO’s ENTOURAGE) and Daniel Roebuck (THE FUGITIVE and the later ABC run of MATLOCK) play Red’s parents, Henry Cavill (Superman of the DC Extended Universe) is a blunderbuss-wielding Hunter, but perhaps the most fascinating—and not in a good way—characterization of all comes in the form of *NSYNC’s Joey Fatone as Jack DeWolfe, this story’s version of the Big Bad Wolf.

I know I’m not supposed to expect much from straight-up family fare, especially that from the early 2000s, but to say this one just had nothing going for it would be a severe understatement. Besides being entirely miscast, the film’s dialogue and story are poorly written; its contemporary mindset fails to be even remotely convincing or clever; the attempts at musical numbers are not memorable or catchy; and the visual effects are literally rough around the edges. It’s not entertaining for kids, and certainly not so for adults. If anything, a modern-day YouTuber even halfheartedly attempting to parody this story would do a much better job. It also says a lot that Fox released this through a secondary label (which was actually a revival of a nameplate from the 1980s CBS/Fox days) instead of through their flagship video banner, as if to wash their hands entirely of this whole sordid affair.

What was I thinking, thinking that adding this to my queue so long ago was such a good idea? Was I just that starved for entertainment back then? I don’t think I’ll ever know…but on the very, very small upside, I’ve seen worse before…