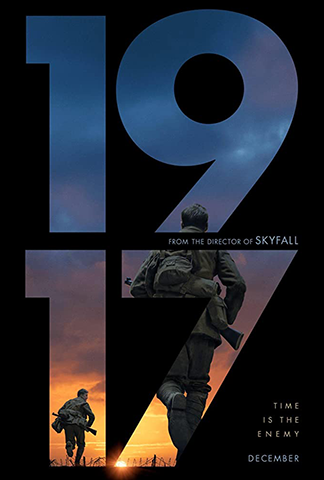 Another one for the Wanted-To-See-It-In-Theaters-But-Couldn’t file!

In April 1917, during World War I, the German Army withdraws to the Hindenburg Line in Eastern France, where they aim to overwhelm British troops who are planning an offensive attack. General Erinmore (Colin Firth) sends two soldiers (George MacKay and Dean-Charles Chapman) to deliver a message to Colonel Mackenzie (Benedict Cumberbatch) at an isolated regiment ordering the attack to be called off in order to prevent an inevitable massacre, which would include the brother of one of the soldiers.

Sam Mendes was inspired by stories his grandfather told him about his service during World War I (in which he was a messenger for the British on the Western Front) in directing, co-writing, and co-producing this film. That inspiration definitely shows in a screenplay that, while not entirely historically accurate, never lets up the tension as it literally moves forward.

In addition, the film also benefits from a rather unique way of storytelling with the help of cinematographer Roger Deakins (who won a very well-deserved Oscar® for his achievements on this production) and editor Lee Smith. It was the first production to utilize a then-new camera from Arri which incorporated the 4K large-format image sensor of their Alexa LF into a smaller camera body, allowing Deakins to capture particularly intimate shots. Particularly claustrophobic scenarios are emphasized with the use of a 35 mm lens, which is wider than the 40 mm used for most of the rest of the film. But perhaps most notable and commendable of all is the fact that the story is effectively told in the form of two virtual—but not actual—continuous shots, accomplished using long takes as well as choreographed camera movements and meticulous editing decisions, with the only true cut occurring at a particularly crucial turning point in the film. Buoyed by this lack of cuts, Thomas Newman’s atmospheric yet dynamic score becomes even more of a driving force for the story, and a more-than-suitable substitute for typical editing points. The result is a stunning technical marvel that, on many fronts, brilliantly balances the atrocities of war with the emotion of humanity.

Mendes stated to The Irish Times that he “felt an obligation to honor [his] grandfather” in making 1917. I feel he has more than done that here.