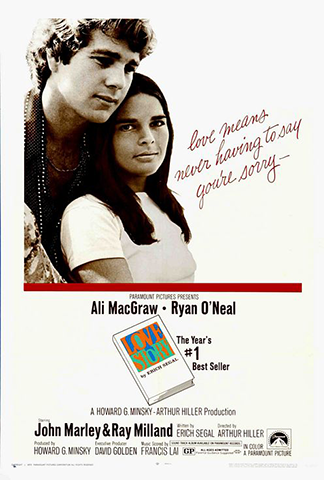 Nearly fifty years following its initial release, I finally bothered to watch this romantic drama for myself that I heard quite a bit about over the years. At the very least, it’ll get me what this site has been lacking for quite some time: actual movie reviews!

Oliver Barrett IV (Ryan O’Neal), heir to an upper-class family, is attending Harvard University (where his surname is plastered) to study law, although he is also one of the college hockey team’s roughest players. He meets Jennifer Cavilleri (Ali MacGraw), who attends the neighboring and now-defunct Radcliffe College as a student of classical music. The two have many quick snips toward each other but ultimately fall in love despite their differences, as well as Oliver’s father (Ray Milland) in particular disapproving of their relationship and threatening to cut off his son if he goes through with it.

Erich Segal originally wrote LOVE STORY as a screenplay which he sold to Paramount Pictures. The studio requested that he adapt the screenplay into a novel as a preview of sorts to the film, effectively reversing the traditional process of a story being written in novel form before being adapted into a screenplay. The novel version, released on Valentine’s Day, became the top seller of 1970, and the film was a similar smash hit when released in December of that year; at the time of release it was the 6th-highest-grossing film of all time in North America. The film was nominated for seven Academy Awards®, winning for Best Original Score (Francis Lai’s memorable, melancholy, if not slightly melodramatic theme for the film was lyrically adapted as the top-10 hit “Where Do I Begin?” as performed by Andy Williams). It fared better at the Golden Globes, winning Best Screenplay, Best Director, and several top prizes in the Drama subcategory including Best Picture and Best Actress (MacGraw).

That said, this film definitely does not hold up fifty years later. It arguably has as many flaws as its main characters do, and not one persona in the entire film comes off as genuine or likable. Some viewers, I’m certain, would have a problem with how tragic this story ended up being, but I feel like it would have been more tolerable and emotional had the underlying relationship itself, and both of the individuals involved therein, been properly conceived and built up in order to make us as viewers care and evoke empathy from us.

Such, I believe, is the problem with many of these opposites-attract romances in fiction: they are either written perfectly or written poorly; there is no in-between. It’s no wonder, then, that Harvard’s own Crimson Key Society holds screenings of this film for incoming freshmen with the intent of mocking the on-screen schlock-fest. For my part, I can’t say I blame them in the slightest.