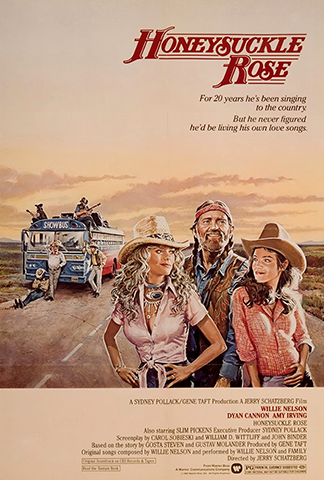 Real-life country music artist Willie Nelson plays fictional country music artist Buck Bonham in this 1980 romantic drama. Unlike Willie at that point, Buck is struggling to find success in the industry, and further struggles to balance his career with his obligations to his wife Viv (Dyan Cannon) and son Jamie (Joey Floyd). Things get even more complicated when the young daughter of Buck’s longtime guitarist (Amy Irving and Slim Pickens, respectively) takes her father’s place when he retires, and her crush on Buck ultimately forces him into an awkward love triangle…

HONEYSUCKLE ROSE is primarily a vehicle for Nelson and his songs, and it shows in the fact that most of its memorable scenes take place during the band’s live concert performances (at one point even including a cameo by Emmylou Harris). The songs Buck plays throughout even seem to reflect the life he leads off-stage. However, virtually everything that isn’t a musical performance seems rather stagnant in comparison. The cast somehow manages to make the rather predictable plot work, however, with a fairly decent level of acting from everyone, especially Nelson. Even so, HONEYSUCKLE ROSE may be more enjoyed by fans of Willie Nelson than those who aren’t—and as for me, I’m somewhere in-between.

Ironically, this film may be best remembered for a song that is usually not associated with it, “On the Road Again.” It was nominated for the Academy Award® for Best Original Song, won the GRAMMY® for Best Country Song, and has become one of Nelson’s most recognizable tunes, gaining a life of its own through its numerous media appearances, covers, and parodies.