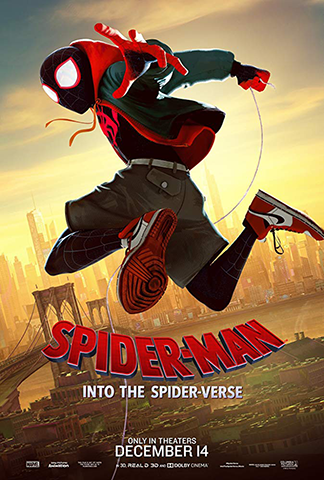 This was the second of two Redbox movies I watched this past weekend. Like the previous entry, it is related to Marvel—but unlike it, this film has no relation to the Marvel Cinematic Universe.

Miles Morales is an average New York teen, the son of a police officer who just happens to loathe everything about Spider-Man. As you might have guessed, a radioactive spider eventually bites Miles. He manages to come across other spider-bitten superheroes from other dimensions—Peter B. Parker, Gwen Stacy, Spider-Man Noir, Spider-Ham, and Peni Parker—and realizes that their very existences are under threat by a particle accelerator known as the Super-Collider, built by Wilson “Kingpin” Fisk, whose reactivation could literally destroy everything.

The SPIDER-MAN film series has had a long and convoluted history with many false starts and many restarts, and my genuine interest in them didn’t really start until Sony finally managed to come to terms with Marvel on the character’s incorporation into the MCU, with Tom Holland playing Peter Parker. This makes the exploration of a multiverse pertaining to the character all the more fascinating to me. Building on its already-intriguing premise, SPIDER-VERSE powers through with a unique animation style that, although primarily CGI which combines numerous frame rates throughout, also seamlessly combines hand-drawn elements with the successful intent of making you feel like you’re reading a comic book. One particularly detailed look at how the animation style was achieved was posted as a long but must-read Twitter thread by Humberto Rosa, one of over 170 animators who worked on the film (yes, I know this gives me an excuse to highlight another drummer girl counterpart to Lauren Lockhart in the process…no regrets!!).

Also supporting this film is a solid and well-balanced story by Phil Lord and co-director Rodney Rothman; and top-notch voice acting, with Shameik Moore plays Miles, with Jake Johnson as Peter B. Parker, Hailee Steinfeld as Gwen, Mahershala Ali as Miles’ uncle Aaron, and Lily Tomlin as Aunt May. An all-star list of “Imaginative Roles” (which I assume is just another way of saying “Extras” or “Additional Voices”) includes Billy Crystal, Amy Adams, Kevin Hart, Amanda Seyfried, and James Corden. This film also contains what may very well be one of my favorite Stan Lee cameos. I must admit, though, that I was genuinely surprised when this film won the most recent Academy Award® for Best Animated Feature.

Even if you’re like me and not totally invested into Spider-Man or its numerous film counterparts, you will definitely enjoy the literally wild ride that is SPIDER-MAN: INTO THE SPIDER-VERSE.