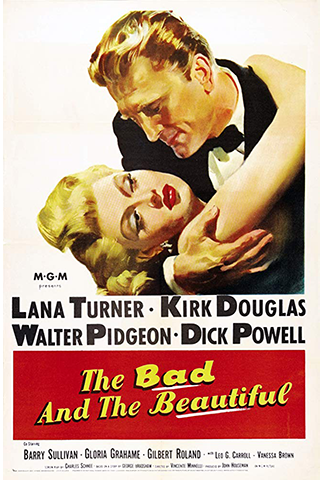 While there is no doubt that the Hollywood of old was certainly far more glamorous and creatively endowed than it is now, there is also no doubt that, then as now, the motion picture industry is not perfect. Then as now, there is a dark side to everything. One particularly notable film which looks at that dark side, released in the wake of the Paramount decree which heralded the end of Hollywood’s Golden Age, is this 1952 entry from Metro-Goldwyn-Mayer directed by Vincente Minnelli.

THE BAD AND THE BEAUTIFUL revolves mainly around the relations of three people to studio chief Jonathan Shields (Kirk Douglas): actress Georgia Lorrison (Lana Turner), director Fred Amiel (Barry Sullivan), and screenwriter James Lee Bartlow (Dick Powell); each of whom have refused to speak to Shields on the telephone, as each had been the subject of his betrayal at one point or another. After setting up the basic premise, the film sequentially goes through each individual’s reasoning as to why they have declined his calls.

The film is based on a 1949 magazine story which was originally about a Broadway producer, but producer John Houseman changed it to Hollywood. The main character of Jonathan Shields is believed to have been based at least in part on real-life producer David O. Selznick, whose lawyer even screened the film in search of anything that might have been considered libelous.

Minnelli was known for making his share of melodramas in addition to his better-known musical fare, and this is certainly the epitome of the latter. Douglas is the clear star of this show even as he doesn’t get top billing (he is second only to Turner); the range of emotions he expresses throughout perfectly fits the role and the generally exaggerated nature of its script. However, his three primary co-stars also deliver very memorable performances which Douglas manages not to overshadow. While Douglas was nominated for the Academy Award® for Best Actor, Gloria Grahame won for Best Supporting Actress as James’ wife Rosemary in a performance which, at less than ten minutes overall, set a record at the time for the shortest to ever win an acting Oscar® which held for a quarter century.

The film is shot in black-and-white at a time when three-strip Technicolor was finally starting to come into its own during the television boom, and utilizes its stark monochromatic picture to the fullest. For these accomplishments, it also received Oscars® for Best Cinematography, Best Costume Design, Best Art Direction (Production Design), and Best Adapated Screenplay.

THE BAD AND THE BEAUTIFUL is one of the most fascinating behind-the-scenes contemporary portrayals of the Hollywood studio system. The fact that the industry embraced it instead of merely blackballing its personnel is a testament to its self-revelatory nature.

THE BAD AND THE BEAUTIFUL at IMDb