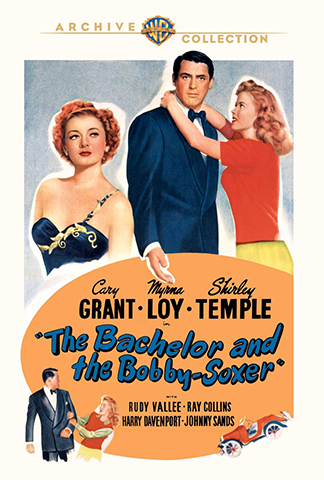 This 1947 film was one of the few times Shirley Temple found anything resembling success in her adolescent years. She plays Susan Turner, who is so smitten with an artist named Richard Nugent (Cary Grant) after he gives a lecture at her high school that she sneaks into his apartment to model for him. Upon the recommendation of her judge sister and guardian, Margaret (Myrna Loy), Richard reluctantly agrees to date Susan until her crush burns out in order to avoid jail time.

THE BACHELOR AND THE BOBBY-SOXER is a classic example of the screwball comedy style which RKO [Radio] Pictures was particularly known for during the Golden Age of Hollywood. Grant is as charming as ever and yet provides a natural touch of humor to the proceedings; Loy portrays the no-nonsense magistrate particularly well. And then there is Temple, well beyond the innocence of her Fox childhood, who certainly takes getting used to in a more mature role such as that which she portrays here, but there is still at least some air of sweetness within her—and, for that matter, in her character. Also of particular note is a climactic scene in a nightclub where all the main characters manage to interrupt a moment between Richard and Margaret in quick, overloading succession.

Although the emphasis in the story is more on the comedy than the romance, this film was a quite enjoyable romp nonetheless and quite an interesting gem to uncover.

THE BACHELOR AND THE BOBBY-SOXER at IMDb